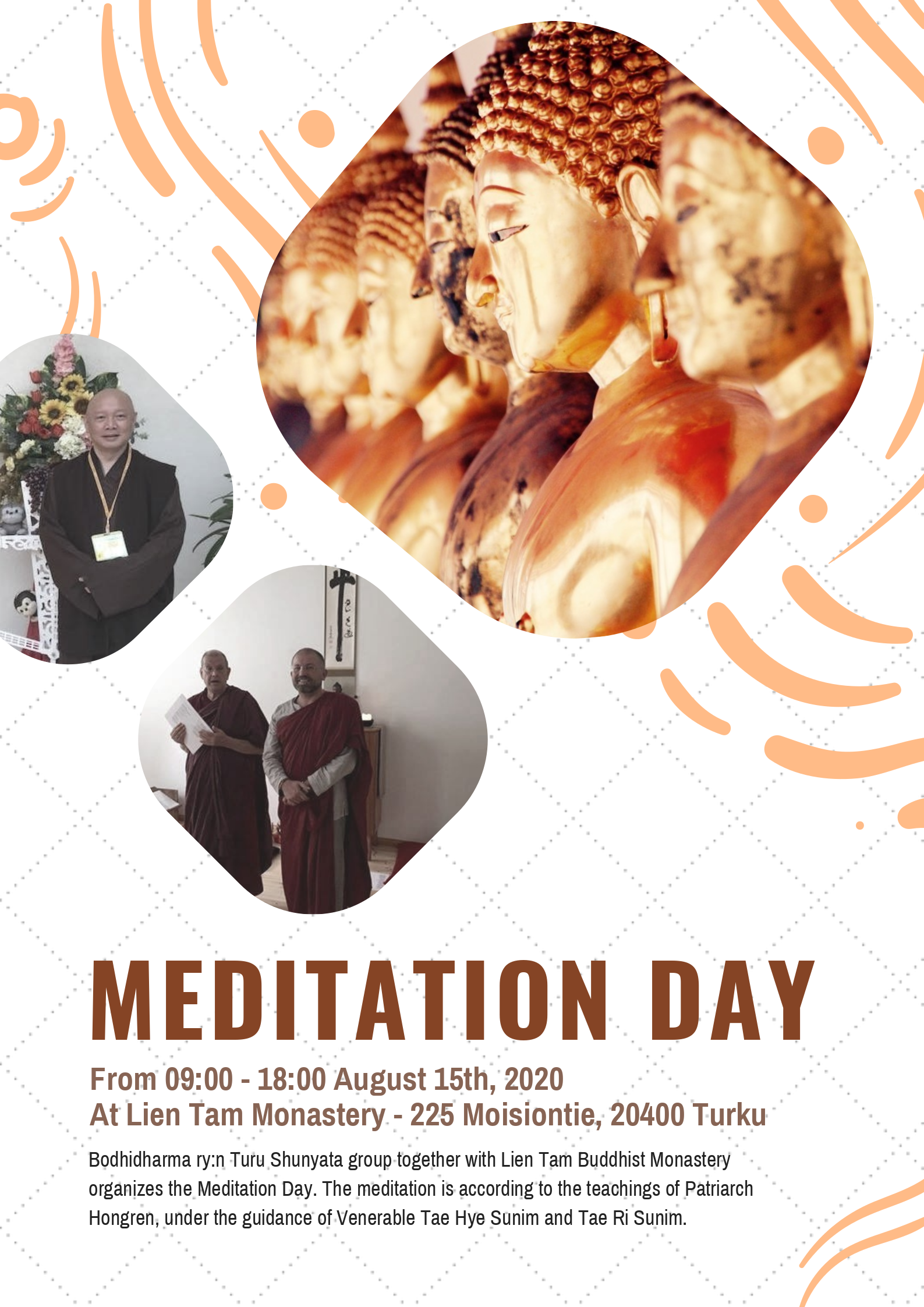 Venerable Taehye sunim was born on the year of the dragon on the shore of Lake Saimaa in Mikkeli, Finland. He is the founder and abbot of Musang Am monastery in Lerici, Italy, and the chairman of Bodhidharma ry in Finland. He has published many writings and translations of Buddhist texts over the last four decades. He has studied Buddhism in many Asian countries, and received ordination as a full monk in the Korean and Burmese traditions.

After studying Mahayan Buddhism in the Soto-zen monasteries of Japan, he went to Korea where he received full Korean ordination as a monk and the name Taehye sunim from the Seon master Ilgak sunim in the Songgwangsa monastery. Ilgak sunim granted him permission to initiate temple activities in the West.Later, in 2000, Taehye sunim acquired a more suitable facility located in Lerici on the coast of Liguria. Since then Taehye sunim has served as the abbot of the Musang Am temple. The lineage of Taehye sunim is a combination of Theravada and Mahayana. In 1999, he received full Theravadin bhikkhu or monastic ordination in Burma from Paññadipa Sayadaw, master of the World Buddhist Meditation Center. There are only a few monks and nuns of Finnish origin. Taehye sunim is the only one among them to have become a “senior monk” (mahathera). He serves as the spiritual guide of the Italian and Finnish Bodhidharma Associations.

Taeri Sunim was born in 1968 in Padua, near Padua, Italy. He spent his childhood and youth in Palermo.

In 1993, he began his monastic life as a candidate under Taehye Sunim. The following year, in 1994, he received a novice ordaination in Korea as a student of Songgwngsa Monastery Master Ilgak. The dharma name was given Tae 太 = large; Ri 利 = blessing).

In Korea, Taeri spent three months of winter and summer retreats in 1994-1997. In 1995, he received full monk ordaination, or bhikshu ordination. In the following years (1997-1999) Taeri Sunim studied the Theravada tradition in monasteries in Thailand and Burma. The Theravada monk coordination Taeri Sunim was given the guidance of Master Paññadipa and the Balinese dharma name Kumara.

Taeri Sunim continued to study and meditate in Taiwan from 1999-2001. In 2004, Taeri Sunim graduated with a diploma in Buddhist Studies from the Buddhist University of Colombo in Sri Lanka. Taeri Sunim completed his Master's degree in Humanities and Pedagogical Sciences at the University of Padua in 2013.

From 2018 officially the "priest" of the Italian Buddhist Union. Taeri sunim practices Dharma in Padua and the Musang Am 庵 相 庵 temple in Lerici, and collaborates with Sri Lankan temples in Italy and Chùa Viên Pagoda in Vietnam.

Bodhidharma Association is the oldest Buddhist association in Finland. It was founded in 1947 and was originally known by the name Buddhismin Ystävät – Buddhismens Vänner ry, The Friends of Buddhism. Our teacher is a Finnish monk Venerable Tae Hye sunim, who lives in Italy, but visits twice a year Finland. We practice sŏn (Korean Zen) and metta-meditation in an atmosphere of spiritual friendship. Welcome!

Lien Tam Buddhist Monastery belongs to the Finnish Vietnamese Buddhist Association (Suomen Vietnamilaisten Buddhalaisten Yhdyskunta), under the guidance of the The Unified Buddhist Sangha of Vietnam in Euro. Our community is the biggest Buddhist community in Finland. The monastery has been built since 2005, and still under some minor construction. Our teacher is Ven. Master Thich Hanh Bao, he is the 42th generation of the Linji Zen School. At our monastery, we cultivate  Zen and Pureland Buddhism.

Venerable Thich Hanh Bao is the chairman of the Vietnamese Buddhist Culture Center and the abbot of Lien Tam Monastery in Turku, Finland. He has been elected as the member of the executive committee of The World Buddhist Sangha Council (WBSC) since 2002. He received the full ordination of a monk in 1994 at Phap Hoa Pagoda, Marseille, France. He served as the abbot of Van Hanh Pagoda, Odense, Denmark, for 10 years. Besides, he currently also take care of Vien Y Pagoda in Italy.

1. In which languages ​​is the meditation day organized?

The language of instruction for Meditation Day is Finnish, but the Venerable master Thich Hanh Bao's talk will be translated from Vietnam into English. For English speakers, you can still join the meditation without any problem, and if there are many English speakers, it is possible to have an English translators.

2. What does it cost to participate in a meditation day?

The meditation day is traditionally organized according to the Dana principle, ie relying on the generosity of the participants. As a spiritual exercise, Dana is the first of the great exercises of perfection. The Sanskrit word Dana is translated into generosity. In this case, it means that the honorable monks will donate their Dharma teachings to the participants and the monastery will donate the facilities for meditation day use.

The Lotus Heart Monastery is built with donations; money, labor and other practical necessities have been donated for the construction of the monastery. The project has been going on for over 22 years so far and so far facilities have been built for Buddhist gatherings such as teaching and meditation. In addition, the donation has made it possible for the monastery to be inhabited by monks who have dedicated their lives to the Dharma under the leadership of Thich Hanh Bao, master of the 42nd generation Linzhi lineage, who traditionally live on donations. Also, the monks Tae Hye Sunim and Tae Ri Sunim, who lead the day of meditation, who thus bestow the Dharma, the highest of the gifts, derive their livelihood from the donations.

3. Can you stay at the monastery a night before the event, if I come from a far place?

Yes you can stay in the monastery, but it is worth reserving a place in advance either by e-mail [email protected] or by using the registration form https://lientam.fi/register

4. What can I learn on Meditation Day?

Taehye Sunim teaches meditation based on the teachings of the fifth Chan-Buddhist patriarch who lived in the 600s.

5. How to dress for meditation day?

Dress modestly. Avoid revealing outfits; the shoulders, knees, chest and abdomen should be covered. Wear suitable long trousers that do not tighten the waist, or a long skirt. Choose clothes in a calm color and suitably loose for the retreat. Socks should be clean and odorless.
Do not use strong perfumes, etc. during the retreat. Avoid wearing excessive jewelry.

6. How to find Lien Tam Monastery?

Lien Tam Monastery is located in the Moision district of Turku at Moisiontie 225.

Bus number 23 From Turku Bus Station from stop no. 41 runs close to the monastery to stop no. 1378. On Saturday 15.8. suitable bus source at 8.13. The journey takes about 29 minutes, so you will arrive at the monastery stop at about 8:44 am. From the traffic circle of the shopping center, continue straight ahead, ie from the second junction onwards for about half a kilometer.

Those coming from the direction of Tampere can pull off the Moisio motorway junction. From the traffic circle of the shopping center, continue straight ahead, ie from the second junction onwards for about half a kilometer.

7. Can a beginner participate in a meditation day?

Yes you can participate, but it is good to be prepared to sit on the floor for a relatively long time.

8. Can a blackmailed person participate in a meditation day?

Yes you can, participating in meditation does not require commitment to anything, but meditation can deepen your own personal beliefs. We can recommend the book Living Christ, the Living Buddha, by the Vietnamese xen master Thich Nhat Hanh.